Caroline Garcia is a French tennis player, one of the best players in the world, currently being ranked #6 by WTA. Being good in both singles and doubles, she is the winner of 5 singles and 6 doubles WTA tour titles. 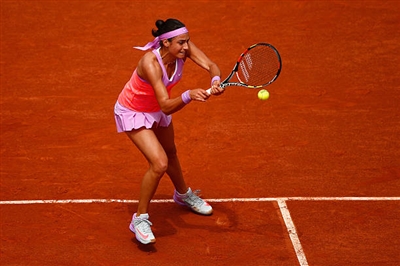 Caroline Garcia was born on October 16, 1993, in Saint-Germain-en-Laye, France. She started the professional career in 2011. Her first WTA competition was 2011 Australian Open, where she reached the second round. In 2013, Garcia took part in her first Wimbledon championships and lost in the second round.

2014 was a breakthrough year for the athlete. She gained her first WTA tour title at the Copa Claro Colsanitas, beating former world #1 and defending champion Jelena Jankovic in the final. Caroline reached her first quarterfinal at a Premier event at the Mutua Madrid Open. She also got to the third round at Wimbledon and quarterfinal at Wuhan Open. 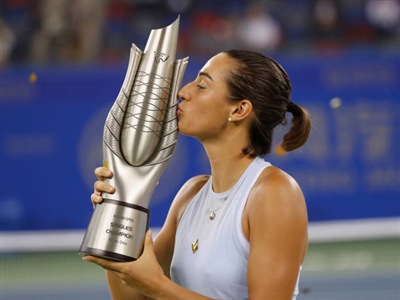 In 2015, Caroline Garcia reached the finals at the Mexican Open and Monterrey Open, where she was defeated by Timea Bacsinszky. However, on her way to the final, she managed to gain her first victory over former world #1 Ana Ivanovic.

In 2016, Garcia won her first Premier mandatory/Premier 5 doubles title at the Madrid Open, playing together with Kristina Mladenovic. At the French Open, duo Garcia/Mladenovic won the women’s doubles title, the first Grand Slam title for the both players. They became the first all-French pair to win French Open women’s doubles title since 1971. Moreover, they won the Volvo Car Open, the Porsche Tennis Grand Prix as well as were finalists of US Open and China Open. The French even received the WTA Award for Best Doubles Team of the Year and were named ITF World Champions.

In singles, Caroline gained the Internationaux de Strasbourg title, becoming only the third Frenchwoman to win it since 1987, and Mallorca Open title. She got to the semifinal at the Dubai Tennis Championships and Monterrey Open.

Garcia also played for France at the Fed Cup. In 2016, she led the team to the Fed Cup final, France’s first final since 2005 and got a Heart Award for her sportsmanship.

Greenleaf’s Merle Dandridge: Inside My Self-Care Routine
How I’ll Be Gone in the Dark Really Affected the Hunt for the Golden State Killer
How The 100 Prequel Episode “Anaconda” Fits Into the End of the Series
Tiffany Haddish Shaves Her Head in Must-See Transformation
Princess Raiyah of Jordan Gets Married in First Royal Wedding Since Coronavirus Outbreak
Former Miss Colombia Daniella Alvarez Dances Again After Recently Having Her Leg Amputated
Mary Kay Letourneau Dead at 58 After Cancer Battle
Thandie Newton Recalls What It Was Really Like Working With “Dominant” Tom Cruise
Golf Pro Sean Fredrickson and His Three Kids Die in Plane Crash
Rob Kardashian Flashes a Big Smile With Friends at a Fourth of July Party After Social Media Comeback
Jersey Shore’s JWoww and Deena Cortese Respond After Cast Is Criticized for Not Wearing Masks
Usain Bolt Deserves a Medal After Revealing His Baby Girl’s Unique Name
Zach Braff Promises to “Take Care” Of Close Friend Nick Cordero’s Wife and Son
Bring the Boho Beach Vibes Indoors This Summer With These Coastal Decor Accents
Billie Eilish’s Parents Considered Sending Her to Therapy for Her Justin Bieber Obsession
This Month’s Best New Beauty Products
Kylie Jenner Slams Claim She Refused to Promote a Black-Owned Brand on Instagram
Paris Jackson Confronts Battle With Self-Harming: ”I Tried to Kill Myself Many Times”
Becca Kufrin Says It’s Not the Year to “Pretend Everything’s Perfect” Amid Garrett Yrigoyen Split Rumors
Bad Bunny Makes Playboy History and Looks Good Doing it
Josh Brolin and Wife Kathryn Are Expecting Baby No. 2
Christopher Meloni on Return to Law & Order and “Inherent Drama” Between Benson and Stabler
Matthew A. Cherry’s Hair Love Getting TV Series Treatment as Young Love for HBO Max
Rhobh Sneak Peek: Watch Denise Richards Offer Up a Stern Warning to Lisa Rinna
5 H&m Finds We’re Obsessed With This Week
Terry Crews and CNN’s Don Lemon Debate Black Lives Matter Movement
Chris Evans and Lily James Spark Romance Rumors as They’re Spotted Out Together in London
Whassup?! Check Out These 20 Surprising Secrets About Scary Movie
Omg, Olay Overnight Masks and Serum Sticks Are 50% Off!
Nicole Kidman Posts Rare Photo With Daughter Sunday For Her 12th Birthday
Here’s How NFL Quarterback Patrick Mahomes Just Made Sports History
Anthony Anderson Calls Out Kanye West Over 2020 Presidential Bid Announcement
5 Things We Learned From Demi Lovato’s Most Candid Interview in Quarantine
Inside Nick Cordero and Amanda Kloots’ Heartwarming, Heartbreaking Love Story
These $27 Denim Shorts With the Perfect Length Have 919 5-Star Amazon Reviews
7 of the Funniest Moments From the Celebrity Game Face Premiere
A Trip Through Time: The Bachelor: The Greatest Seasons Ever Revisits the Very Beginning
Rob Kardashian Is “Back Baby”! Why He’s Suddenly Living His Best Life
Halle Berry Steps Away From Opportunity To Play Transgender Man After Backlash
The Kissing Booth 2: Everything We Know About the Netflix Sequel