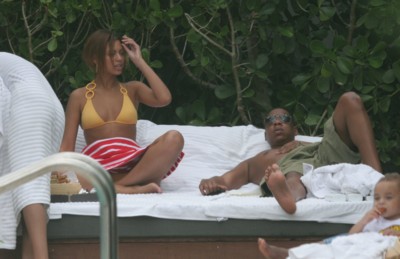 Beyoncé is our “mood 4 eva.” The legendary singer is known for keeping her personal life very private.However, in a rare and candid interview with British Vogue the Ivy Park founder opened up about raising her three kids: Blue Ivy Carter, 8, and twins, Rumi Carter and Sir Carter, 3.When asked how she’s evolved as a parent, especially this year […]

Beyoncé’s 39th birthday festivities is our “mood 4 eva.” The famous Virgo celebrated her special day on Sept.4 with a huge bang.According to an eyewitness, the “Black Parade” singer jet-set off to Croatia with her family, which included her husband Jay-Z, and their three kids: Blue Ivy Carter, 8, and twins Rumi and Sir Carter, 3.”The Carters celebrated […]

Beyoncé Shares How Miscarriages Taught Her to Embrace “Pain and Loss”

Beyoncé is sharing a very personal story with her fans.The superstar singer, who has kids Blue Ivy Carter, Sir Carter and Rumi Carter with husband Jay-Z, took part in a candid Q&a with her beloved fans for her Elle cover story, released Monday.In the “Ask Me Anything” interview, Bey was asked about awards, and if […]

Beyoncé’s self-described love letter to Africa just took on a whole new meaning.  The world-famous performer’s latest documentary special, which aired tonight on ABC and is titled Making the Gift, offered a behind-the-scenes look into the creation of her recent The Lion King: The Gift album.  In it, cameras first follow Bey, Jay-Z and their children, Blue Ivy Carter, Rumi […]