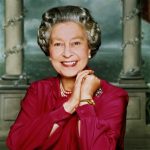 You're not the only one doing video calls while social distancing.

Queen Elizabeth II recently took part in a Webex conference with a little help from her daughter, Princess Anne.

ITV captured the virtual meeting for its new documentary Anne: The Princess Royal at 70.

The clip started off with The Queen's assistant private secretary Tom Laing-Baker introducing Her Majesty to the rest of the group.

"I'm very glad to have been able to join you." Princess Anne then offered some guidance—asking her mother if she could see everybody and noting she should see six people on her...