The Met Gala is back and we’re ready for some high fashion Pda, baby.After being canceled last year due to the coronavirus pandemic, the fashion spectacular is returning on Monday, Sept.13 with a “more intimate” gathering, according to The Metropolitan Museum of Art in New York.And what’s more intimate than a celebrity couple deciding to take […] 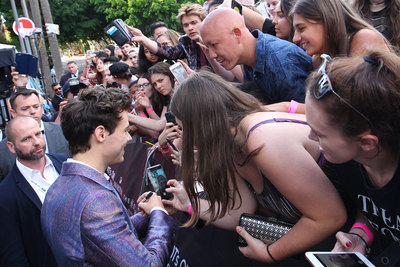 Sparks are still flying high between Harry Styles and Olivia Wilde.The duo, who confirmed their romance earlier this week, continues to showcase their undeniable chemistry.The 26-year-old singer and Booksmart director were recently spotted looking smitten over each other during an afternoon outing.The pair was seen hanging out with a close group of friends, including the newlyweds who got married over […] Fans are sure to adore a new glimpse at Harry Styles and Florence Pugh as they channel the stylish 1950s in their upcoming film.  The two stars were photographed during the Palm Springs film shoot for the highly anticipated movie Don’t Worry Darling on Monday, Dec.1.People on social media are positively buzzing over the photos taken of […] Turns out “Watermelon Sugar” is a sexual innuendo.Who knew? Katherine Heigl and a handful of Harry Styles fans just realized that the summer bop is actually an ode to the female anatomy.Specifically, Harry sings about oral sex.If you already knew that, then feel free to skip ahead to Katherine’s remarks.If not, then all you need […] And the nominees are…On Tuesday, Nov.24, talented artists from around the world received nominations for the 2021 Grammys.This year, many stars received a Grammy nomination for the very first time, including Harry Styles and Megan Thee Stallion.Megan was surprised by the Recording Academy’s Interim President/CEO Harvey Mason Jr.during the announcement ceremony when, as she was announcing the nominations, […] Harry Styles, is that you?  Not quite, but Jimmy Fallon did a golden job transforming into the One Direction alum.On Wednesday, Nov.18, The Tonight Show put the late-night host up to the test during a parody of Vogue’s 73 Questions.  The three-minute video started with Jimmy opening the door to his abode dressed as the “Watermelon Sugar” singer. In an English […] Believe it or not, Logan Paul says he is all for Harry Styles wearing a dress on the cover of Vogue.On this week’s episode of his podcast Impaulsive, the controversial YouTuber brought up the historic magazine cover to his co-hosts George Janko and Mike Majlak, sparking an intense debate over what it means to be “manly.” To the surprise of many Twitter users, Logan was […] Fans all over the world are now seeing Emma Corrin dazzle as Lady Diana Spencer (a.k.a.Princess Diana) on season 4 of “The Crown”, but in real life, the 24-year-old British actress also has some glamorous connections.Corrin appeared on Tuesday’s “The Tonight Show Starring Jimmy Fallon” where she revealed that singer Harry Styles has close ties […]