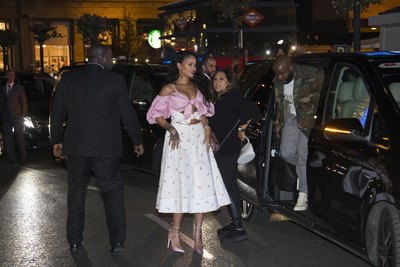 Rihanna and A$AP Rocky continue to fuel romance rumors, this time, with an outing in New York City.  Earlier this week, relationship speculation involving the musical duo went into overdrive after they were spotted hanging out with a group of friends.

Now, RiRi and Rocky are raising eyebrows once again after stepping out for a solo stroll in the city.

As an eyewitness tells E! News, they've been keeping things low key.  "They have been staying at Rihanna's and laying low not doing much," the insider explains.

"They came out for an evening walk and strolled around the neighborhood.

It was cold and dark and they didn't go far.

They just walked for a bit and were chatting.