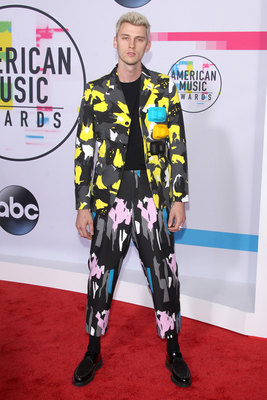 Cheers erupted and sparks flew as Machine Gun Kelly brought a very special guest onstage with him at a show during the Indy 500 weekend: His girlfriend, Megan Fox.

The two appeared together as he performed at Barstool Sports' party at Grand Park in Westfield, Ind.

on Friday, May 28. The 31-year-old rocker briefly puffed on what appeared to be a cigarette and handed it to the 35-year-old actress, who also took a puff, after which he began performing his song "I Think I'm Okay." "She came out after everyone was chanting 'Megan' for some time," an eyewitness told E! News.

"Then she did stay on the stage in the background for the whole song." The...