Joseph Proctor Webb Jr. (born November 14, 1986) is an American football quarterback for the Carolina Panthers of the National Football League (NFL). After having played college football for the UAB Blazers, Webb was drafted by the Minnesota Vikings in the sixth round of the 2010 NFL Draft as a quarterback. 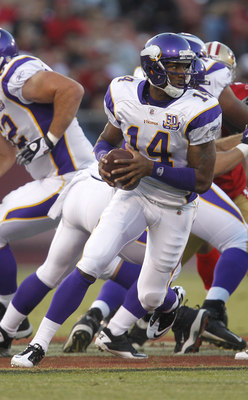 Born to Joseph and Wanda Webb, Webb attended Ensley High School from 2001-2004. He transferred to Wenonah High School in 2004, where he was named honorable mention Class 5A all-state by the Alabama Sports Writers Association. While attending Wenonah, he led the team to the first round of state playoffs, eventually finishing third in the region. Webb set a school record at Wenonah for touchdowns in one game, throwing four in a 415-yard passing performance. Webb also played basketball and baseball and was a member of the National Honor Society.

In 2006, he did not get an opportunity to play until the 11th game at Southern Miss, but he was able to start the final two games of the season. During the season finale at University of Central Florida, he connected on 33 of 51 passes (64.7 percent) for 426 yards with one touchdown pass, a season high for any Blazer quarterback that year.

During the 2007 season, Webb saw extensive action, playing as a wide receiver, starting seven games and finishing the season with 30 receptions for 459 yards with three touchdown catches.

The 2008 season was Webb's first full season as UAB's quarterback, starting all 12 contests, where he passed the C-USA record for rushing yards by a quarterback in a single season with 1,021 yards. He was also ranked fourth in the nation for rushing yards for a quarterback. He was voted a permanent season team captain by his Blazer teammates at the end of the season. As a junior, Webb became the first player in NCAA history to pass for more than 2,000 yards and rush for 1,000 in consecutive seasons. Webb was ranked in the top 12 nationally of three statistical categories: total offense (5th), rushing (10th) and passing efficiency (12th).

Webb finished his 2009 senior year season with 5,099 passing yards and 3,427 yards on the ground, the latter the highest season total by a quarterback in NCAA history.

For his career, Webb had 5,771 passing yards and 2,774 rushing yards for a total of 8,545 offensive yards. He also registered 37 passing touchdowns, 24 rushing touchdowns and four receiving scores. Webb wasn't invited to the 2010 NFL combine.

Working out as a wide receiver at UAB Pro Day, some of Webb's numbers would have led other wide receivers' at the NFL combine. His vertical jump of 42.5 inches (108 cm) was better than any turned in by a receiver, as was his standing long jump of 11 feet 5.5 inches (3.49 m). Webb's bench press—21 reps at 225 pounds (102 kg)—was the best at his position. Only one other receiver managed 20 reps at the same weight, according to UAB athletic department. Webb also ran the 40-yard dash in 4.43 seconds.

Webb's NFL debut was against the Buffalo Bills on December 5, 2010. He took the opening kickoff – becoming the first Vikings quarterback to return a kickoff – before leaving the game with a hamstring injury.

Webb made his NFL debut at quarterback on December 13, 2010 against the New York Giants. He completed two passes in five attempts for eight yards and also had a 16-yard run.

Webb rushed for his first NFL touchdown as quarterback on December 20, 2010, against the Chicago Bears in Minnesota. He was filling in for an injured Brett Favre. Webb completed 15 of 26 passes for 129 yards, with two interceptions; he also had six rushing attempts for 38 yards and a touchdown.

On December 28, 2010, Webb made his first career start, against the Philadelphia Eagles. Scoring one rushing touchdown and throwing for 195 yards, he was 17 for 26 with no interceptions. Initially projected to lose by two touchdowns, the Vikings pulled off an upset win, 24-14.

During the 2011 season, Webb was used occasionally as part of a "blazer package" specially designed for his unique skillset.

In the Vikings' week 14 game vs the Detroit Lions, starting quarterback Christian Ponder was benched early in the 3rd quarter after throwing 3 interceptions and fumbling once. Webb entered the game with a 31-14 deficit, and proceeded to bring the team back and nearly achieve a victory, throwing his first NFL touchdown pass and rushing for 109 yards including a 65-yard touchdown run (a franchise record for QBs, and the longest run of his career). His 109 rushing yards set a franchise record for most rushing yards in a game by a QB. Webb's efforts ultimately led to a 1st and goal situation at the 1 yard line with 9 seconds in the game and a score of 28-34. On the final play, an uncalled facemask on Webb by the Lions' defense caused him to fumble, ultimately ending the game.

On December 24, 2011 against the Washington Redskins, Webb came in after Christian Ponder left the game with a concussion. Webb was 4 of 5 for 84 yards and two touchdowns for a perfect 158.3 passer rating; he rushed for another touchdown. He led the team to a 33-26 victory at Washington.

During the 2012-2013 season, Webb had his roles limited as he was not once used as a QB in the regular season. On January 5, 2013, Webb was named the starting quarterback for the Vikings' Wild Card match against the Green Bay Packers after Christian Ponder was sidelined with an elbow injury. Webb finished with 11 completions on 30 attempts with 180 passing yards and 1 TD in a losing effort.

With the signing of Matt Cassel on March 14, Vikings coach Leslie Frazier mentioned that Webb may be given consideration to play other positions besides quarterback. "(Webb) is such a talented athlete that we want to make sure that we're doing the right thing by him and our team, as well." said Frazier, "That's something we'll continue to discuss as we go forward." It was confirmed on May 15 that Webb had been informed of his switch to wide receiver. Frazier showed interest in having Webb play QB again when Josh Freeman and Christian Ponder were injured. Webb later said in a press conference that he has no desire to play QB again for the Vikings. In 2013, Webb caught 5 passes for 33 yards.