Mikaela Shiffrin is one of the best alpine ski racers at the moment. She specializes in slalom and giant slalom. Mikaela will represent the United States at 2018 Winter Olympics and we are sure that this year’s results will be fantastic, especially after her victory in 2014.

So, let’s have a closer look at the reigning Olympic and Overall World Cup champion and discover what the way of Mikaela Shiffrin to her stardom was. 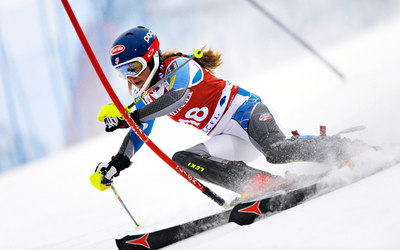 Mikaela Shiffrin was born on March 13, 1995, in Vail, Colorado. Her parents, Eileen and Jeff Shiffrin, are both former ski racers. She started to learn to ski at the age of 2. Since childhood, she competed in various races and mastered her skills at Burke Mountain Academy in Vermont.

At 15, the athlete started to compete in FIS races and won her first North American Cup race in super-combined discipline. The same season, she started to compete at the international level and won a bronze medal in slalom at the FIS Junior World Ski Championships in Crans Montana, Switzerland. 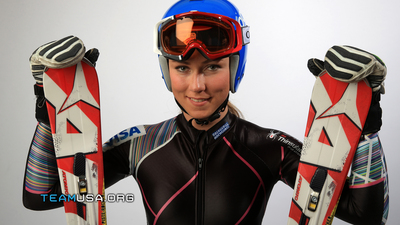 Mikaela made her debut at the World Cup in March 2011, taking part in the giant slalom race in Spindleruv Mlyn in the Czech Republic. In December, she took her first World Cup podium, winning a bronze medal in slalom.

In a year, in December 2012, the racer won her first gold medal in night slalom at the World Cup in Are, Switzerland, becoming the second-youngest American to win that title after Judy Nagel. She won the night slalom race two more times, securing the overall gold medal in slalom that season.

In 2013/14, Mikaela won a slalom race in Levi and got a reindeer as a prize. Continuing the World Cup season in Beaver Creek, the athlete gained her first podium in giant slalom, finishing 2nd. By the end of the season, Shiffrin also won a bronze medal in giant slalom and a silver one in slalom as well as 4 gold medals, finishing the season with a World Cup slalom title.

The alpine ski racer started the 2014/15 season by winning a giant slalom race in Solden. Failing to rise to the podiums during the following three races, Mikaela returned to her best condition and won the races in Kuhtai, Zagreb, Maribor, Are and Meribel. She ended the season winning her 3rd consecutive World Cup title in slalom.

The 2015/16 season was the most difficult for the athlete. She started the season with two wins in Aspen. However, in Are, she injured her knee during the warming up and had to refrain from competitions for 9 weeks. Mikaela made a fantastic return by winning the race in Crans Montana and two more slalom races in Jasna and St. Moritz.

Shiffrin started 2016/17 season by finishing 2nd in giant slalom in Solden and winning two slalom races in Levi and Killington. On December 11, 2016, she gained her 11th straight World Cup victory in slalom in Sestriere and, in two weeks, won the giant slalom in Semmering.

In addition, she won slalom races in Maribor and Squaw Valley, parallel slalom in Stockholm, combined in Crans Montana and giant slalom in Squaw Valley, finishing the season as an overall World Cup champion. 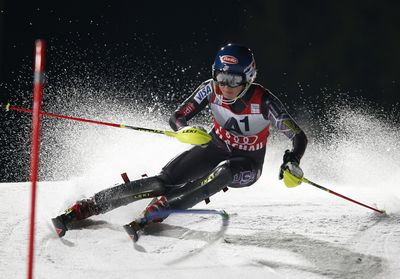 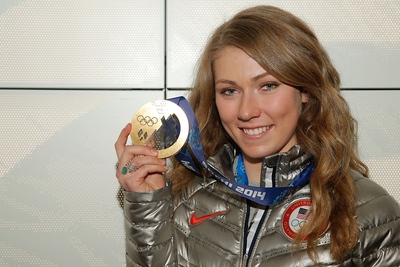 At 2014 Winter Olympics in Sochi, Mikaela won a gold medal in slalom and finished 5th in giant slalom. By winning the Olympics 3 weeks before her 19th birthday, the athlete became the youngest ever Olympic gold medalist in slalom. 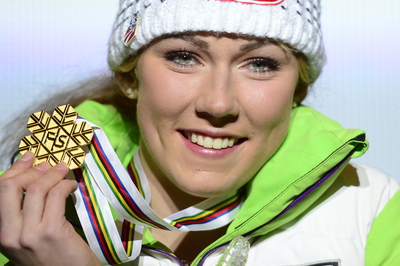 Being only 16 years old, Shiffrin won a gold medal in slalom at the US National Championships at Winter Park and became the youngest American skier to win this title. In 2015/16 season, she became the national champion in slalom and giant slalom.

In 2012, Mikaela was voted as FIS Alpine World Cup Rookie of the Year after winning her first World Cup race at 16. After gaining the overall World Cup title in 2017, the athlete received “Skieur d’Or” award as the best alpine skier of the year.

Now, Mikaela Shiffrin is the most highlighted US athlete of the Olympic Games in PyeongChang and is one of the main candidates for the medals. She is supported by a great number of fans not only in the United States but also around the world and her posters are already among the most popular ones.